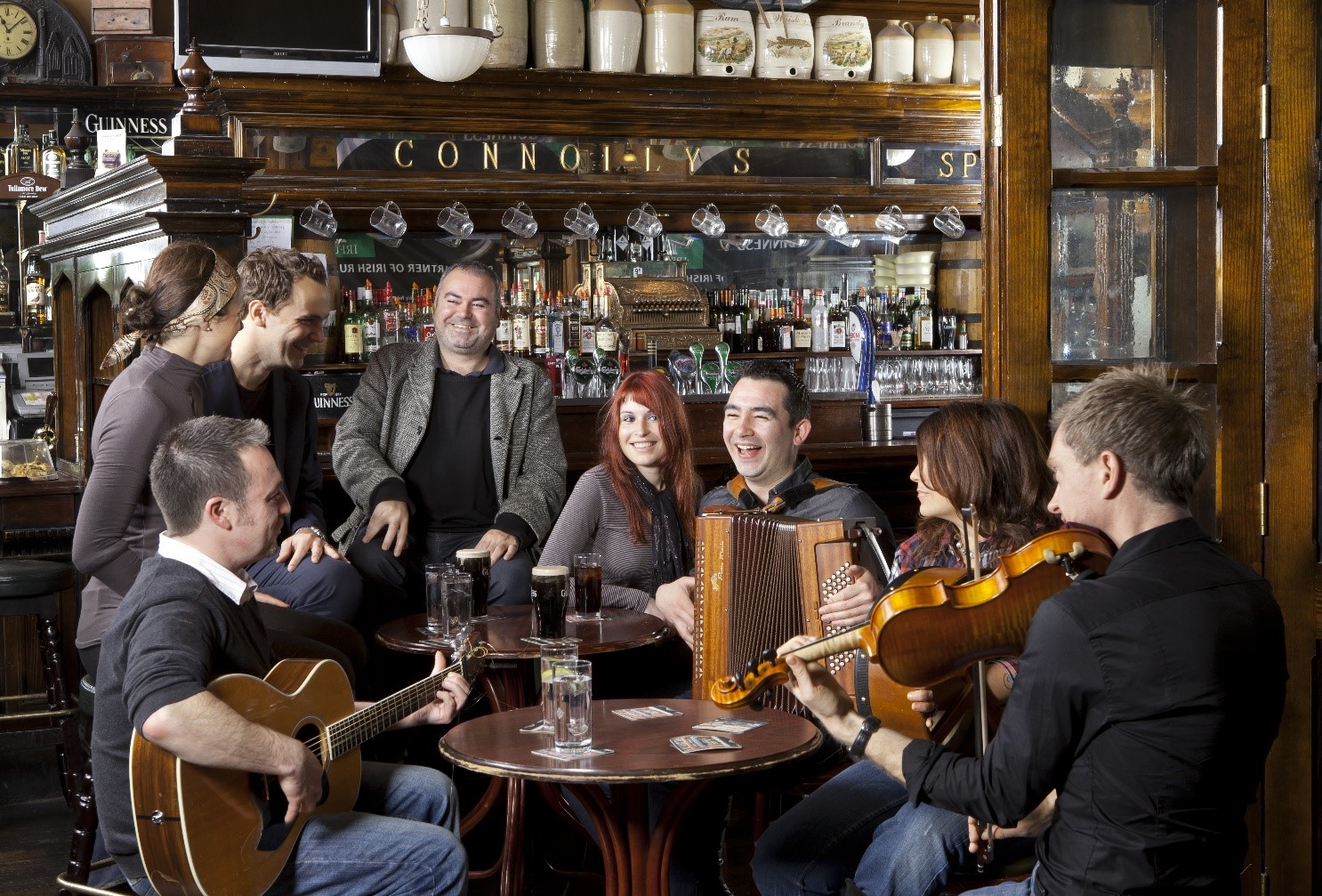 Dublin, Ireland – the home of “The Black Stuff!”  And this magical city is also home to some of the friendliest and liveliest pubs in the world!

Dublin is regarded as one of the most vibrant and friendliest cities in the world.  It is undoubtedly home to some of the best Pubs in the world.  Whether you like Live Music or a quiet Pint with friends, Dublin has a pub for all tastes.

It’s been a difficult task, but our team have set out to name the Top 10 Pubs in this incredible city.  After some enjoyable nights out and plenty of sampling, here is our shortlist (in no particular order): 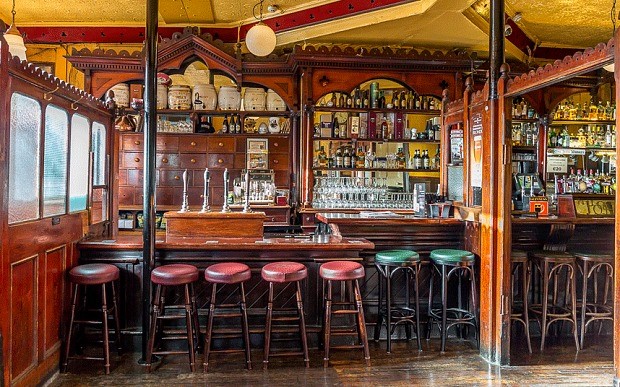 Kehoe’s Bar was first licensed in 1803 when the winds of revolution permeated the Dublin air, this authentic, unpretentious Victorian shrine is one of last great heritage pubs of Dublin. The interior throughout Kehoe’s is the product of a Victorian style renovation completed towards the end of the 19th century which has been preserved to the present day. Nowadays this old pub is the buzzing haunt of tourists, scholars, shoppers and business people alike.

The premises that you see before you today, were completed towards the end of the 19th century in typical Victorian style. You can view stained glass mahogany doors, old Irish snugs, partitions and the entire homely feel throughout the pub.

There is no better pub in the world to sit over a Pint of Guinness and watch the world go by! 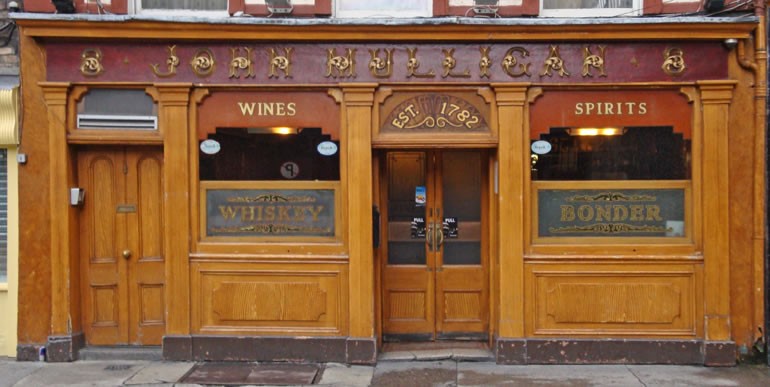 Mulligan’s is more than a Dublin pub; it is an Irish cultural phenomenon. It has a unique and colourful history, spanning over two hundred years. Mulligan’s has hosted the famous Judy Garland, Seamus Heaney, Con Houlihan, James Joyce and John F. Kennedy.

Quirkiness pervades its atmosphere. The ashes of a US tourist are interred in its clock. Barmen have seen ghosts on the premises. For decades, performers at the Theatre Royal thronged to Mulligan’s, mingling with journalists from ‘The Irish Press’ who smoked, fumed and interviewed celebrities in it. 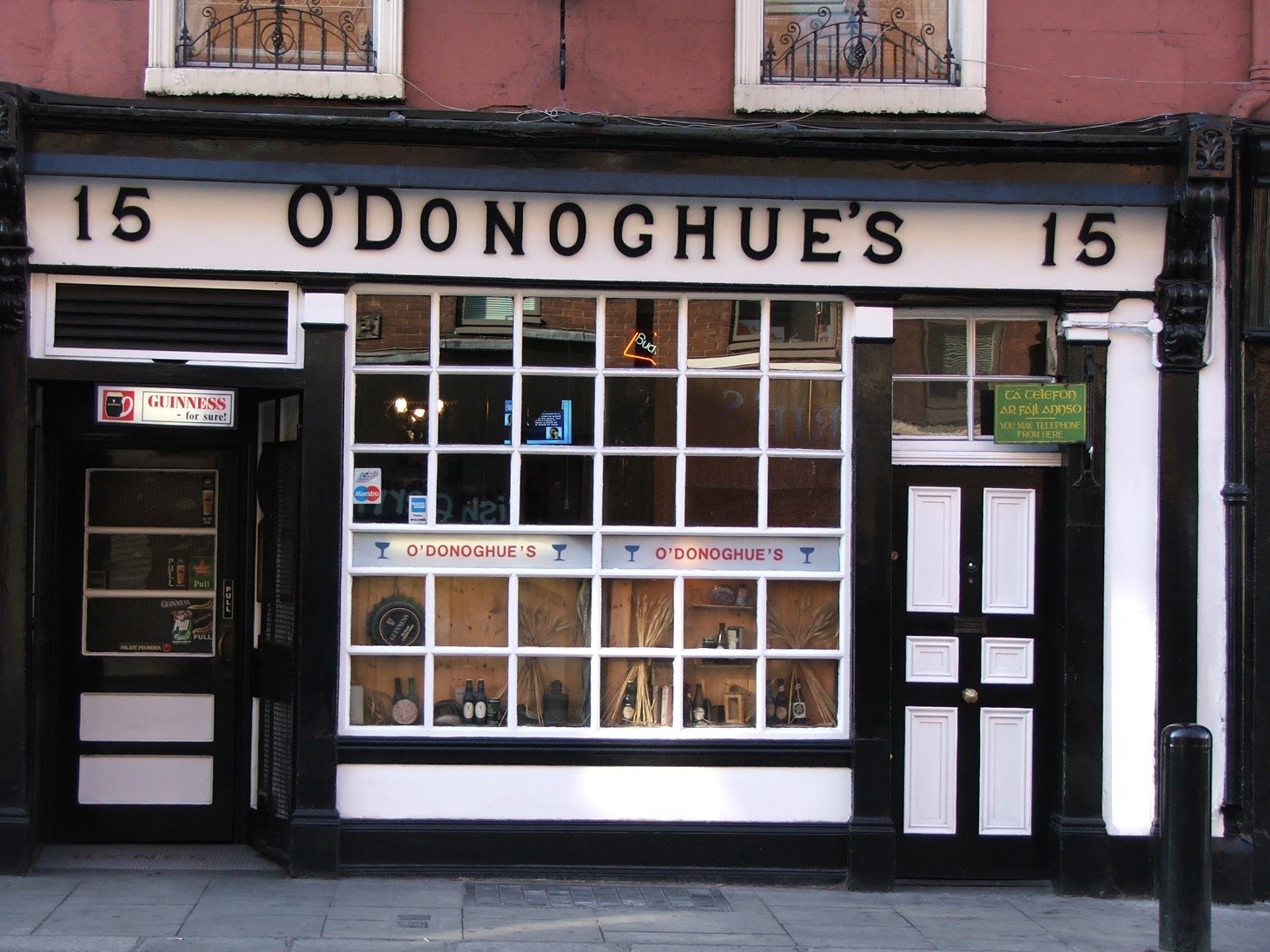 We like to think that an evening spent at O’Donoghue’s is an experience that stays with you. A favourite haunt for Dubliners and tourists from every corner of the world, who come to share the authentic character of one of Dublin’s oldest bars, and to admire the artistry of real Irish musicians.

At O’Donoghue’s the music is live seven nights a week, musicians from all over Ireland come together to share their love of Irish traditional music in one of Ireland’s most famous bars.

Because of O’Donoghue’s special atmosphere and reputation the mixture of good Guinness and live music guarantee’s your visit will always be remembered.

O’Donoghue’s has a rich heritage and stands on a very historical site in Dublin City. Yet it’s more modern musical history is really the stuff of legends. Ask any Irish man to name the artists or bands that have shaped Irish traditional and contemporary music and the name of the Dubliners always comes up. Christy Moore and the Dubliners have spent many a memorable night entertaining Dublin’s music lovers in this incredible bar. It is this spirit that is kept alive by today’s musicians who play amongst an array of drawings and photos of Irish musicians that adorn the walls of O’Donoghue’s. 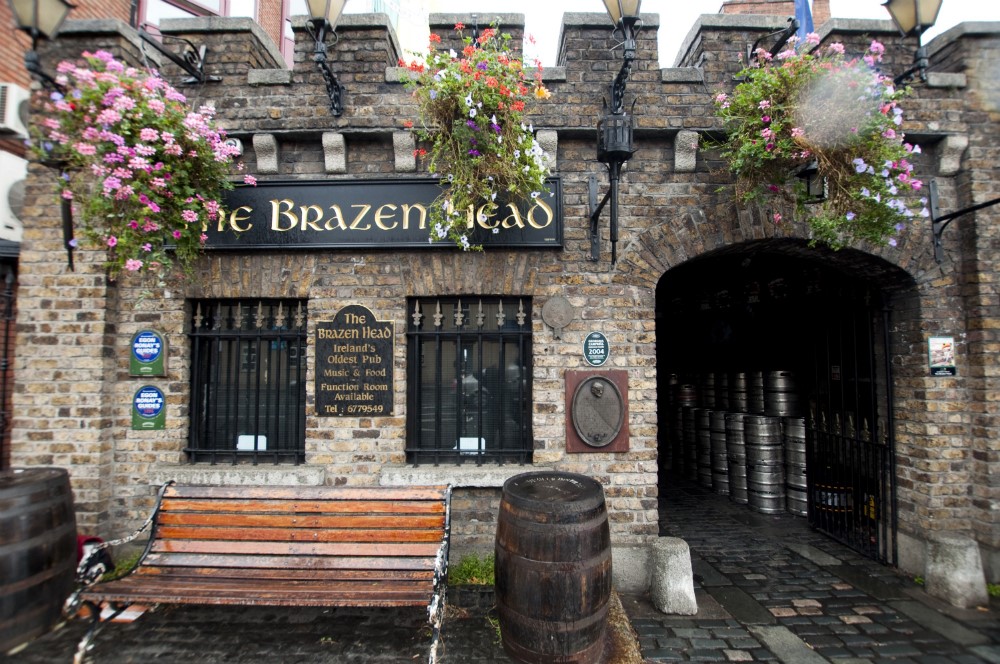 The Brazen Head is officially Ireland’s oldest pub, dating back to 1198. While it is unclear how much of the original 11th century coach house is still intact, there is a palpable sense of history within these timeworn walls. If you are looking for the true Irish pub experience, then the Brazen Head Pub should be your first port of call.

The pub has managed to retain the charm and characteristics of it’s past and in particular it’s patrons, who have included such writers as James Joyce, Brendan Behan and Jonathan Swift as well as such revolutionaries as Robert Emmet, Wolfe Tone, Daniel O’Connell and Michael Collins. Today the patrons still include some famous faces, including some very famous musicians like Van Morrison, Hothouse Flowers, Mary Black and Garth Brooks.

The Brazen Head is only a short walk from Christchurch Cathedral and The Guinness Brewery, and is well worth a visit for both its historical value and reputation as one of Dublin’s best Irish music venues. 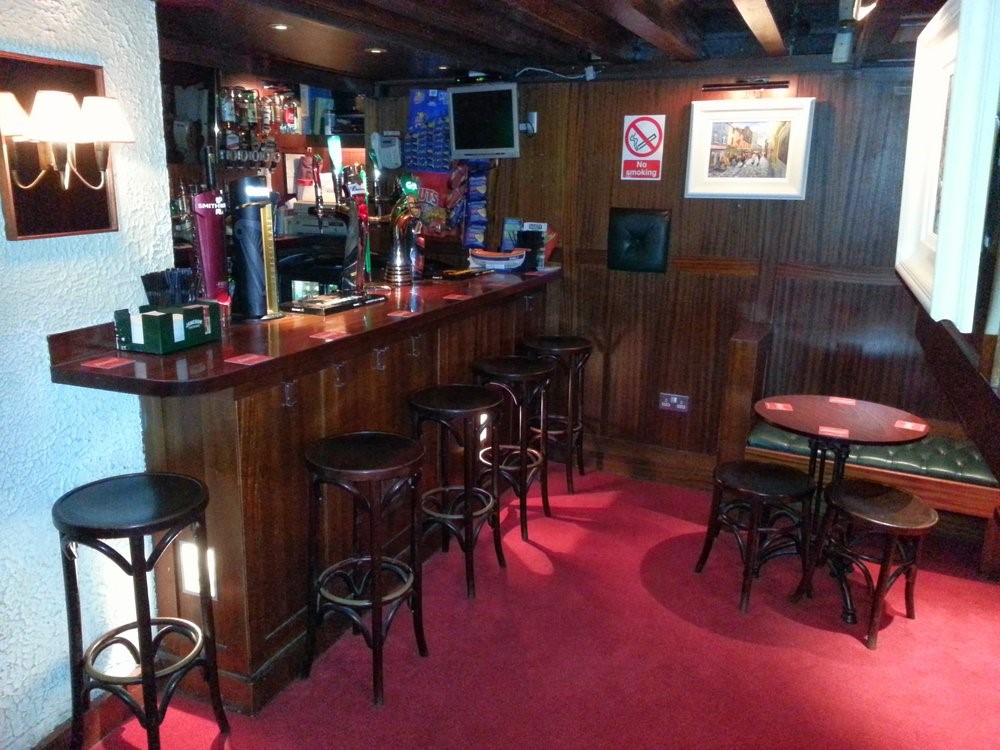 Officially Dublin city’s smallest pub, the Dawson Lounge is a Dublin institution and is well worth a visit for a pint or two!  You would be forgiven for passing this place by on the street considering its unassuming presence. However, serving the cheapest pint of Guinness and with its limited space, this place is always packed to the rafters and is likely to be an unforgettable experience.

The Dawson Lounge is furnished in the style of a ’70s pub with simple chairs and stools around tables creating a nice, unfussy ambience. The staff are very friendly and know how to pour a pint and they are never that far away because it’s such a small pub.

A great pint with an incredible atmosphere – The Dawson Lounge is well worth a look during a visit to Dublin. 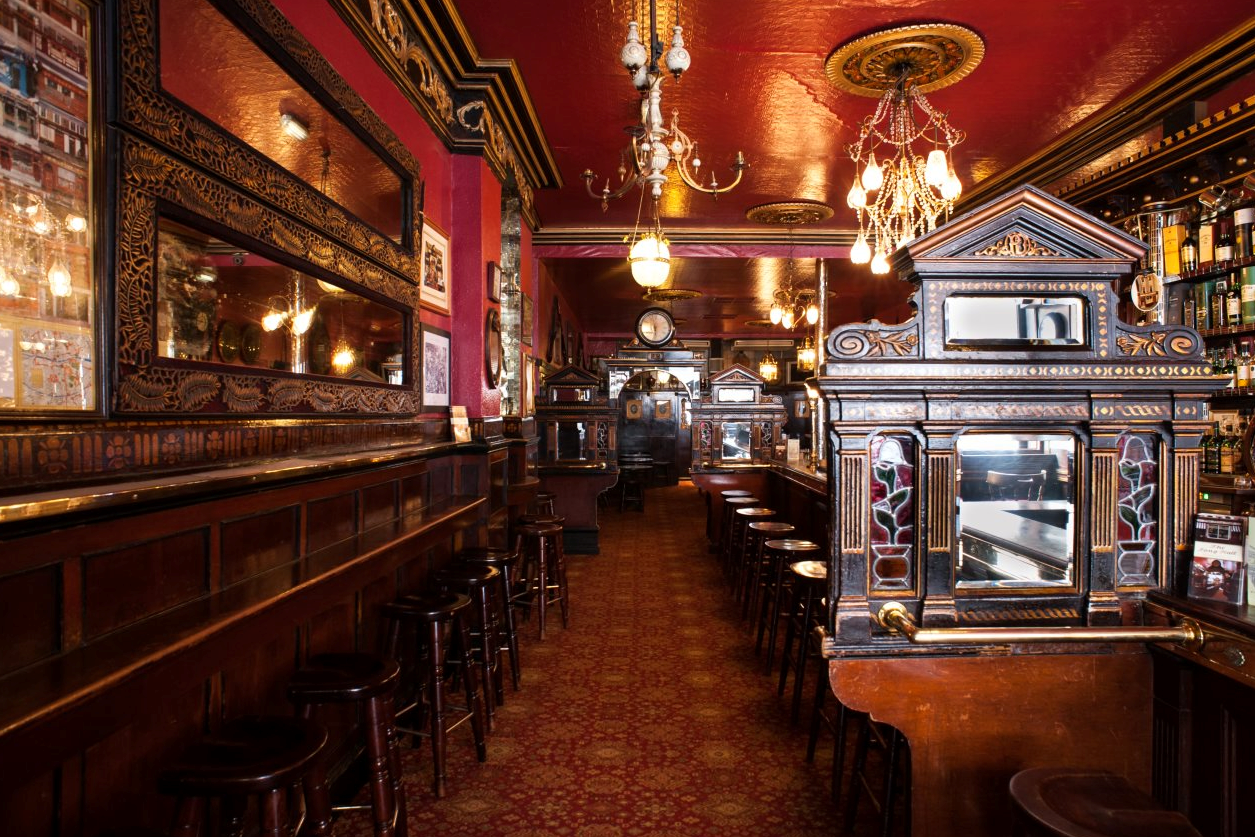 One of the oldest pubs in Dublin, this pub was named after a chapel dedicated to Saint George in 1181. The Long Hall preserves a Victorian atmosphere evoking a by-gone age. The original pub which backs on to Dublin Castle opened in the 1860’s and was much used by the Fenians. Today, The Long Hall retains much of its old charm; on the walls are engravings of the dealings of the Russian Emperor Paul I with the Polish patriot Kosiusko as well as prints of Gainsborough ladies. Over the entrance to the toilets are panels of art nouveau glass. The woodwork interior adds an air of authenticity to the premises.
With so much history and serving some of the best pints of Guinness in Dublin, The Long Hall is definitely worth a visit! 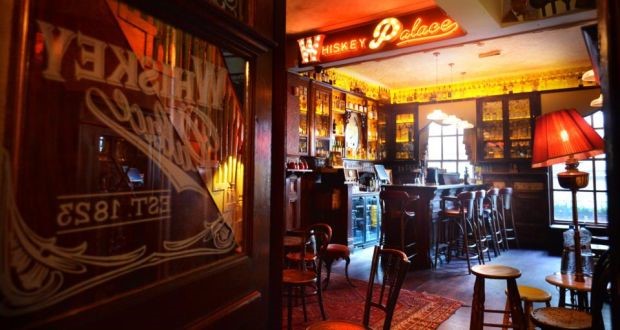 Untainted, unspoiled and unperturbed by the passage of time – that’s what makes The Palace Bar one of Dublin’s best-loved original Victorian pubs. This priceless jewel provides a very important bridge between the 19th century Victorian pub and Dublin’s great traditions of literary hostelries. During the 1940’s and 50’s this old pub became the home of international fame and intellectual refreshment under the patronage of R.M. (Bertie) Smyllie, then Editor of the Irish Times. It was the social home of the Fourth Estate playing host to newsmen, correspondents and compositors of Dublin’s three daily papers.

The Palace was built in 1823 and soon after was bought by a family named Hall. In the early 1900’s The Ryan family from Tipperary took over the pub and “The Widow Ryan” sold the pub to Bill Aherne in 1946 for the sum of £27,000, which was a huge amount at the time. Many people thought he was crazy to pay such an amount but Bill always maintained he knew he had got a bargain.

As ‘The Irish Times’ offices are situated less than three minutes away it was inevitable that both establishments would forge close links and that is what happened. Irish Times staffers in the 40’s, 50’s and 60’s would come into the snug and back room to compose articles and meet “sources” and to this day it is a popular spot for some journalists to get their quota of liquid refreshments.

Today the Palace is run by Bill’s son Liam and his grandson William. The decor of the Palace is the same as that which greeted the first customers 189 years ago.

Quite simply, The Palace is an iconic Dublin pub. 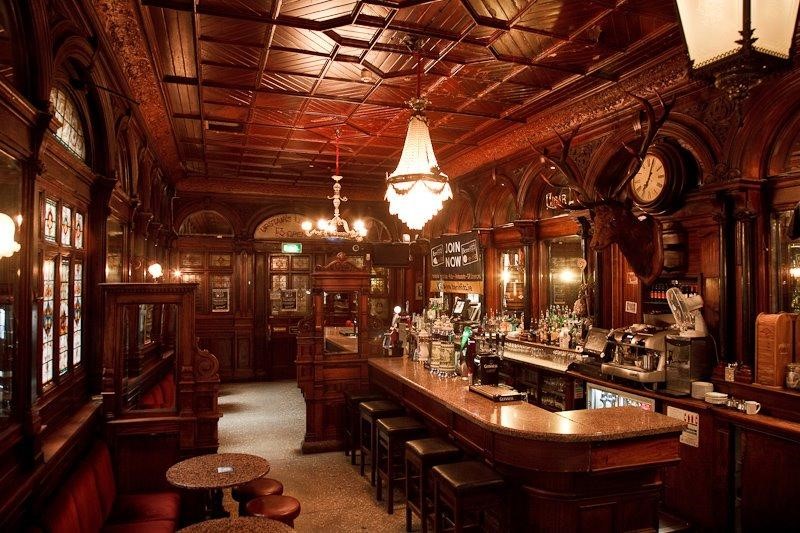 The Stags Head is a historical Dublin pub featured in Dublin Pub tours renowned for it’s hospitality and famous pint of Guinness!

You truly capture a sense of the hidden Ireland when you accidentally stumble upon The Stag’s Head. Finding it is akin to discovering a rare treasure as it is concealed through a narrow passageway off Dame Street, although access can also be gained through Exchequer Street or Georges Street. When you enter inside this feeling of discovered booty is greatly intensified as a virtual paradise of culture and old world values confronts you. This is probably Dublin’s best preserved Victorian pub – and everything here is of authentic Victorian origin. Take time to look around and savour the sumptuously carved Victorian mahogany fittings, the mosaic marble tiled floors and granite table tops.

Visiting the Stag’s Head is a wondrous experience whether you call when the premises is cosy, warm and glowing at night time, or in early morning when this is old repository of liquid culture is radiantly illuminated by wafts of sunlight filtering through the stained glass windows. The mahogany bar, capped with red Connemara marble, follows the classic Victorian architectural pattern, being long and punctuated by exquisite partitions that divide into private compartments or stalls.

Though a tavern has existed on this site since the 1780’s, this premises first attained great fame in the 1830’s as ‘John Bull’s Albion Hotel and Tavern’. This was one of the most sought after premises of the age in close proximity to ‘Dublin’s Theatreland’ and the fashionable stores of Dame Street and College Green.

Don’t miss the great craic of one of Dublin’s most renowned Traditional Music sessions that can be enjoyed downstairs in the Stag’s Tail. 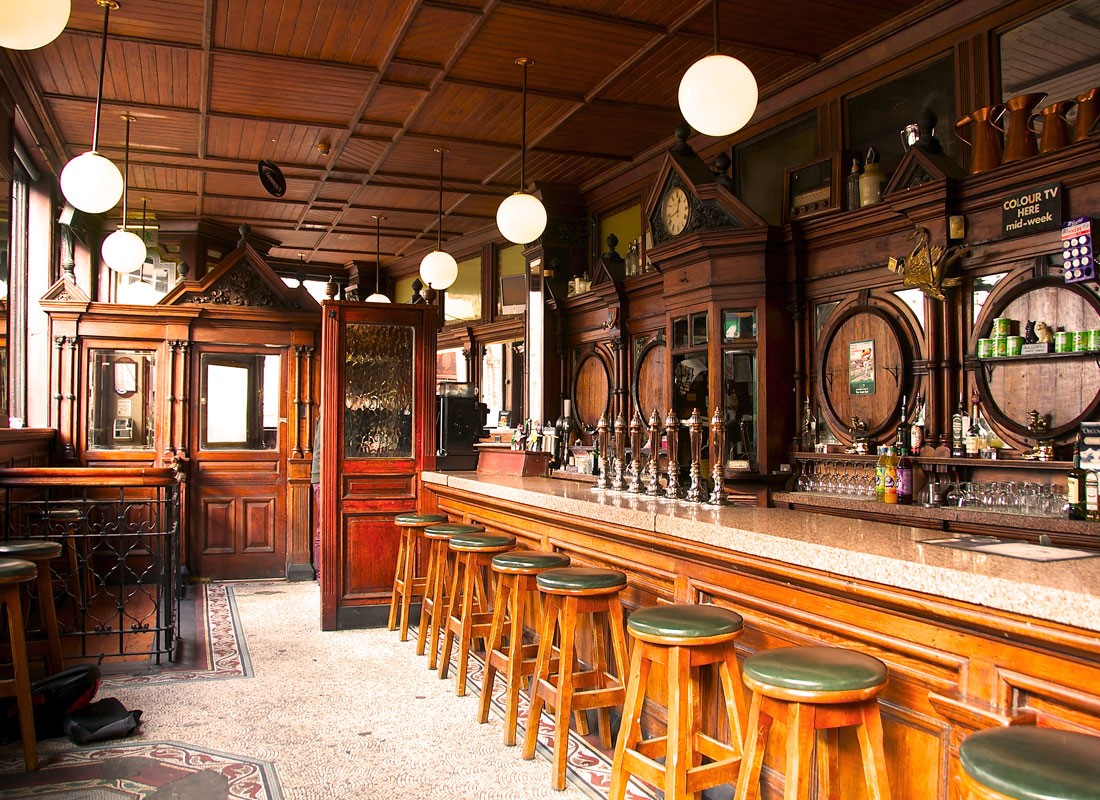 The Swan was established in 1723. The present bar dates from 1897 and is only one of twelve remaining intact original Victorian bars in Dublin. The bar has many distinguishing features like a cash desk, solid Scottish granite bar counter, original copper alloy pouring taps, ornate hand carved teak bar back, mounted barrels for pouring spirits and a mosaic floor. The building has played its part in Irish history and was used in the 1916 rebellion as a signally post, was centrally located in the middle of the Dublin Dardanelles during the War of Independence and was occupied during the Civil War by the Anti Treaty forces. The building housed a hotel until 1924. The Lynch Family bought the pub in 1937 and this year celebrate 75 years in business. Sean Lynch a son of the original owners, played rugby for Leinster, Ireland and The British and Irish Lions and has on display his collection of international Jerseys and rugby memorabilia. Including in the display are a Hall of Fame award, signed presented jerseys and a bust of Sean. This stunning pub is steeped in history and offers some of the warmest hospitality and best Guinness in Dublin. 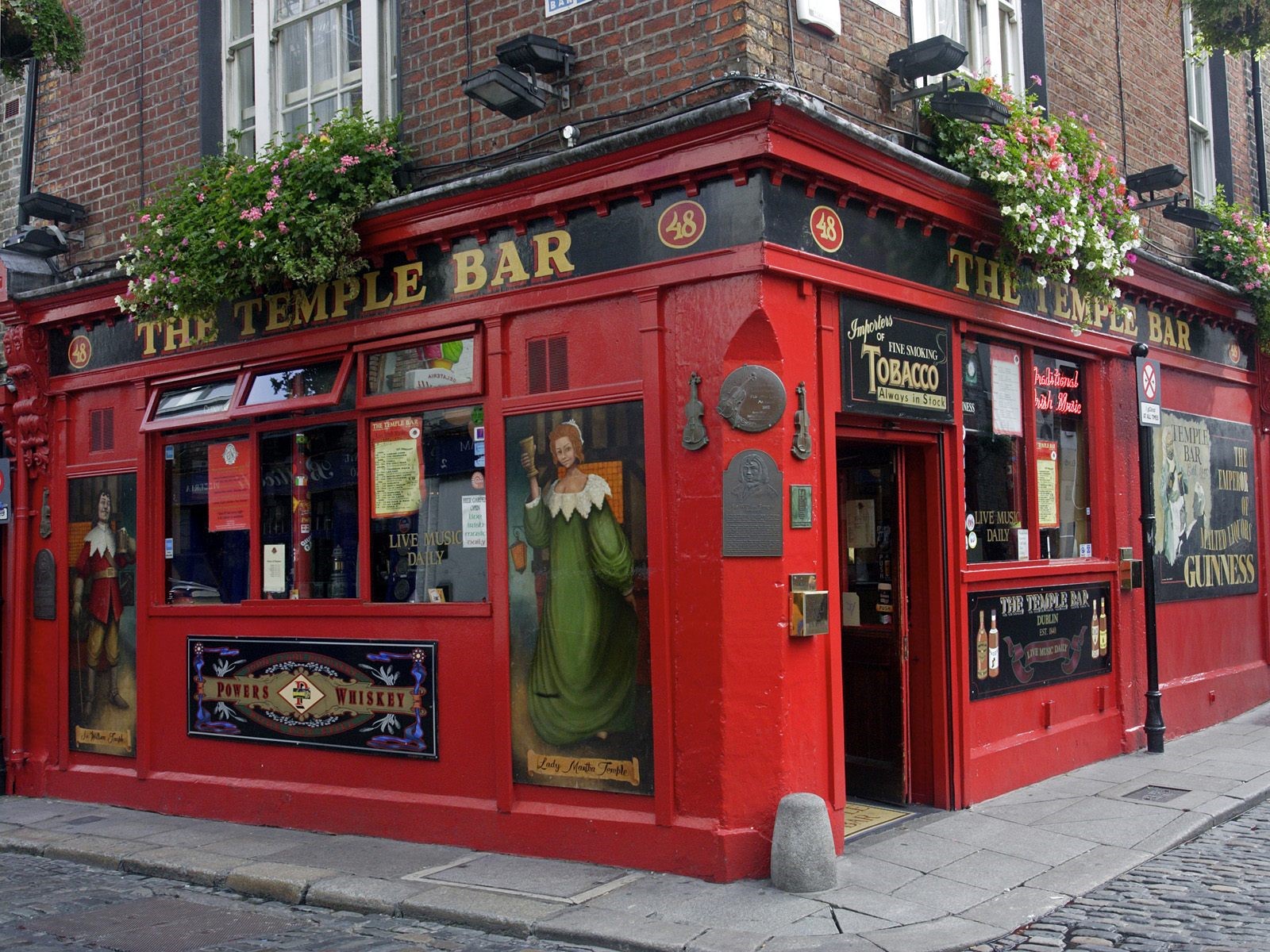 A tradition of a genuinely warm welcome and first rate friendly service, is the hallmark of the friendliest watering hole in Dublin. Whether you are alone or with a group of friends, the craic is mighty and you will always feel at home at the Temple Bar. Overseas and out of town visitors will find our staff to be a valuable mine of information on Dublin’s history and sights and can recommend others places to visit to make your stay a memorable time.

As winner of the Irish Music Pub of the Year for 2002 to 2012, the owners pride themselves on their traditional Irish Music sessions daily.  There is no cover charge! So drop in and enjoy the “craic agus ceoil.”

The Temple Bar has it all… The Whiskey Collection… The Beer Garden…. The Oysters… The Atmosphere… The Music Sessions… The Competent and Friendly Staff… The Best pint of Guinness and Oh, the craic is mighty!

This is only a taste of the incredible Pubs that Dublin has to offer.  There are so many more extraordinary pubs in our capital city to enjoy a “Pint” or a “Small One” in.

All Fairways and FunDays tours promise the very best of Ireland by day and by night – spectacular scenery, exhilarating entertainment, fantastic food, amazing activities, and magical memories are guaranteed!  And we guarantee that you will have the opportunity to enjoy a drink in some of Ireland’s best pubs!